The KRAS and NRAS genes encode small GTPases that mediate growth factor receptor signaling to downstream effectors that play a role in cell proliferation, survival, and differentiation. KRAS mutations have been commonly found in several types of human malignancies including metastatic colorectal cancer (CRC), lung adenocarcinoma, and thyroid carcinoma. NRAS mutations are found in ~1-6% of CRCs and occur in melanoma and thyroid carcinoma as well.

Several studies have demonstrated that tumors carrying any of these mutant forms of the KRAS gene are less likely to respond to anti-EGFR antibody therapy. [1,2]  The American Society of Clinical Oncology (ASCO) released its first Provisional Clinical Opinion (PCO) suggesting that all patients to be administered anti-EGFR monoclonal antibody therapy should be screened for KRAS mutations. [3] Additionally, studies have shown that metastatic colorectal tumors carrying mutations in exons 2, 3 and 4 of KRAS and NRAS are less responsive to EGFR inhibitors. [4] These findings strongly suggest that screening for both KRAS and NRAS mutations is necessary to more accurately identify patients who will not respond to anti-EGFR therapy.

The ctRAS Mutation Detection kit is a non-invasive, ultra-sensitive test that selectively amplifies and detects mutations in exons 2, 3, and 4 in KRAS and NRAS from cell-free DNA derived from human plasma. 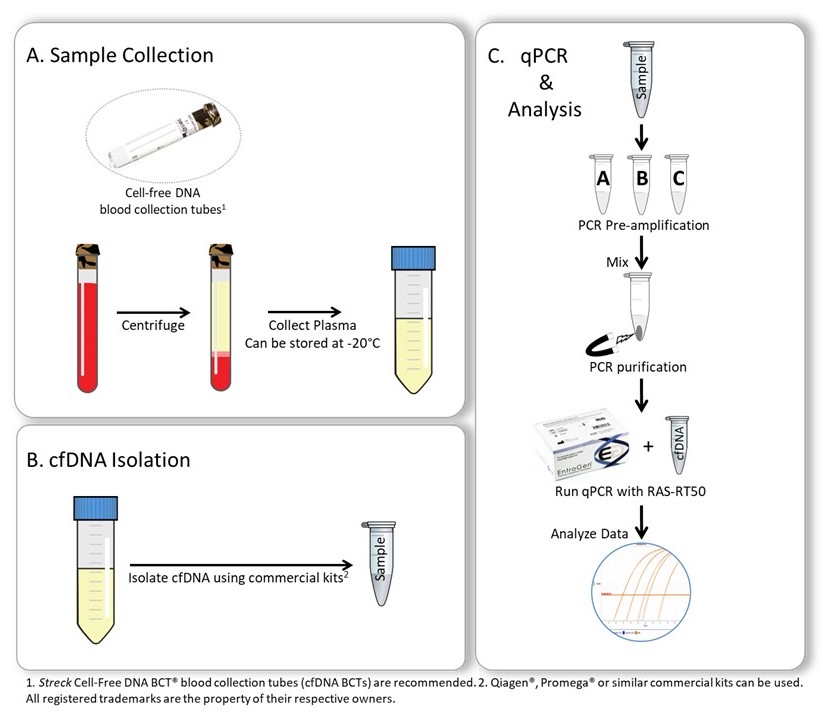 USA: Available for research use only (RUO). Not for use in diagnostic procedures.

Europe: Available for research use only (RUO). Not for use in diagnostic procedures (CE-IVD pending).